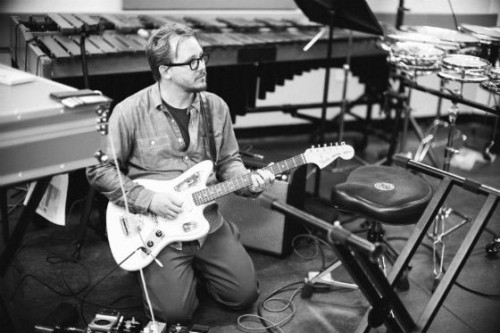 Woody Jackson, one of the composers of the score for Grand Theft Auto V, explains his success:

“All you need is a good room, great musicians and a concept,” Jackson says at Vox Recording Studios, the analog Valhalla he runs on Melrose Avenue. It’s reputed to be the oldest studio that’s not open to the public in the United States.

Jackson’s reasoning might be true, but it doesn’t quite capture why his co-composers, psychedelic hip-hop producers the Alchemist and Oh No, refer to the guitar virtuoso as “the illest.” Or why Academy Award winner T Bone Burnett recruited Jackson to help craft the music for the first season of ABC’s Nashville.

“If I’d known that I’d work with T Bone Burnett, it probably would’ve spared me 20 years of negativity; I could’ve just waited for the dream to come true. He told me that I reminded him of Link Wray and Neil Young,” Jackson says, laughing. “I said I’d heard that before: out of time and out of tune.”

If you saw him in the street, Jackson might seem an unlikely suspect to orchestrate a video game centered on armed robbery and prostitute pillaging. He sports a light brown goatee, black plastic glasses and work boots, gray slacks and a ranch-style button-up shirt. He’s in his early 40s, happily married, the father of a 3-year-old.

His score wields an aggressive yet smooth blend of Krautrock, funk, ambient and brick-smashing instrumental rap. Like the game itself, it has largely received raves. The website Consequence of Sound compared the music — done by Jackson, Tangerine Dream, Alchemist and Oh No — to iconic soundtracks from Quentin Tarantino movies, as well as Shaft, Beverly Hills Cop and Drive.

In its first three days on the market, the game grossed a billion dollars — instantly making Jackson one of the most-heard composers on Earth.

Truth be told, Jackson possesses an exceptional combination of talent, persistence and patience. Raised in small cities in Pennsylvania and Virginia, he grew up wanting to be Tom Waits. While studying at Virginia State, he received harmonica lessons and voodoo warnings from an old-time blues picker turned college instructor. He later transferred to study under legendary jazz patriarch Ellis Marsalis Jr.

When Jackson ran out of money, he dropped out and played guitar in The Useless Playboys, a junk blues band whose apex was touring America opening for The Reverend Horton Heat. Jackson moved to L.A. from Richmond, Va., shortly after the 1992 riots. He worked at McCabe’s Guitar Shop for years, collaborated with Vincent Gallo and earned his keep as a session player on film scores including The Devil Wears Prada and Ocean’s Twelve.

He simultaneously took over the storied-but-in-shambles Vox Studios, bringing in a collection of vintage gear that would shame most used-music stores. There’s a grand piano played by Duke Ellington and Count Basie; kalimbas, hand drums and ancient Farfisa organs. He spontaneously picks up a 1942 Gibson guitar and unleashes a rumbling, outlaw country riff.

“I’m trying to respect the past but not ignore the present. I always try to approach music with an open mind, like a newborn baby, where everything is always fresh,” Jackson says. “When it leads to happy accidents, music can be a really magical thing.”